People have a knack for overlooking the true geniuses of this world, until they either climb their way onto their mainstream channels, or their ideas become so controversial that they can no longer be ignored. In other words, they either ride the popular bandwagon or they become the scapegoats for everything that goes wrong in society. Not that the ideas of a genius have to be of a radical nature with the intention of changing the fundamental values upon which humanity is built. Geniuses come in a wide variety, like Lays chips; there will be some you love, some you hate, and the rest you’re just indifferent to. Hey, the potato chip itself could be considered the creation of a genius, although that may not of been what Mr. George Crum had in mind when trying to satisfy the complaint of one of the customers at his restaurant. This talk of chips is making me hungry, so I digress…

The entertainment world is bursting at the seems with brilliant minds, one of whom is finally being given the attention and respect he deserves. His stories are not only outside the box, but every character, no matter how insignificant their part may seem, is memorable. It’s also best not to get too attached to any of them either, because in his world, no character is safe from the clutches of evil and death. I am, of course, talking about non other than Joss Whedon, the genius behind such stories as Buffy the Vampire Slayer, Angel, Firefly, Serenity, and most recently The Avengers. It is his creative genius that has prompted me to choose his words for today’s Words of Wisdom segment…

“I write to give myself strength. I write to be the characters that I am not. I write to explore all the things I’m afraid of. ”

We all have our reasons for why we write. I, for instance, have difficulty expressing myself in a verbal manner; my knees still quake at the mere thought of giving a speech in front of more than a few spectators. I still have things I would like to say, though, hence my seeking out other, less spotlit mediums. I also write because, like Mr. Whedon, there are certain things I cannot do in the real world that can be made possible on paper, like soaring through the clouds on the scaly back of a dragon, or facing off against hoards of zombies with nothing more than a crossbow. Even if it can never be, I find comfort in knowing that I can create an entire world where I can be whomever I wish to be, even if it’s only on paper. Call it an escape from reality, if you wish, but some of the books I have read give more insight into reality than most of the people I talk to. Maybe if politicians read more fiction, they could see just what kind of world they’re dealing with, and just how influential and dangerous their actions can be …

That’s all for today. Be sure to share to leave your comments, questions or any other thoughts in the comments, and until next time, happy reading!

It’s hard to believe that this will be my last post for 2012!

We have seen a year with many ups and downs – sadly more downs than ups – and witnessed the rise and fall of many great figures. But even in the midst of all the bad times, there have been moments that I will treasure for years to come as some of the happiest times of my life.

Many of those moments, for me, have had some sort of connection to my love of words, literature and the art of writing:

1.Writing with The Fulcrum, for instance, has been a major highlight for me; being able to share something with the world that benefits both them and myself. It has also been one of the big highlights of my university life.

2. Seeing The Avengers with a dear friend of mine. This movie was not only visually stunning, but was also equipped with an amazing script that was made possible by the efforts of non other than the amazing Joss Whedon. One of the things I would wish for in the new year is that Joss Whedon be made a part of more movies, inspiring us with his creative genius.

3. And of course, there are all of the amazing books I have read, ranging from fantasy, to science fiction, and even a little bit of historical fiction. In fact, this brings me to my next topic of discussion!

I must warn you now that the text that follows may contain some potential spoilers from “An Abundance of Katherines” by John Green. If you have not read the book, or are planning on reading it (which I do hope you are, since it’s amazing) then I recommend that you read no further. With that said, I will now share with you my final Book Recommendation of 2012!

An Abundance of Katherines by John Green 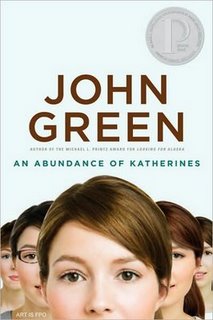 I said this after reading The Fault in Our Stars, but I will restate it because it continues to hold true; I do not care for teen romance literature, but John Green’s books have been the exception. I don’t know how he does it, but somehow he is able to take something that makes me groan at the mere thought of it, and turn it into this life changing experience. He is a literary genius, and I do hope more and more people come to know him and his work. In fact, if you would like to get started on that, you can go watch him and his brother Hank Green on their Vlogbrothers YouTube Channel.

Not only did this book unveil a whole new outlook on the world of fictional romance, but it also sparked within me a new appreciation for mathematics, which is saying a lot coming from the person who could barely scrape a B in math all throughout grade school. The idea of being able to graph out a relationship in order to determine who will be labeled the Dumper of the Dumpee is utterly fascinating, even if in the end his formula turned out to be utterly useless.

It also explores a thought that wiggles its way into everyone’s mind at one point in their life, which is the idea of wanting to matter. We all want our lives to mean something, to have a resounding impact on the world that people will remember for years to come. Colin Singleton, the protagonist of this novel, struggles with this idea, thinking that being a child prodigy and having an aptitude for making anagrams just isn’t enough for him to achieve the kind of greatness he sought. It wasn’t even that he wanted to be famous, but he simply didn’t want to die without making some kind of contribution to humankind.

Finally, there is his Katherine conundrum. Although it’s not entirely believable that one guy could be dumped by 19 girls with the exact same name, and the same spelling of said name, it still made for an enjoyable tale of teenage romance gone wrong. I especially enjoyed the twist at the end where he ended up dating a girl who not only was the exact opposite of the girls he normally dated, but wasn’t even named Katherine!

So I hope you all had a wonderful year filled with good friends, good food and good books. I look forward to continuing our literary journey together.